Snorkelling And Scuba Diving
Enjoy having the ocean to yourself

Lord Howe Island boasts the world’s most southerly coral reefs, and boy are they spectacular. The diversity and scope of the snorkelling and scuba diving at Lord Howe Island is an easy lure for serious divers who want the thrill of having the ocean to themselves.

Only 400 tourists are allowed here each day and few of them actually venture underwater. This gives divers an unparalleled experience without having to venture far from shore.

Five major ocean currents converge at Lord Howe Island, creating an ecosystem favoured by over 90 species of coral and some 500 species of fish. 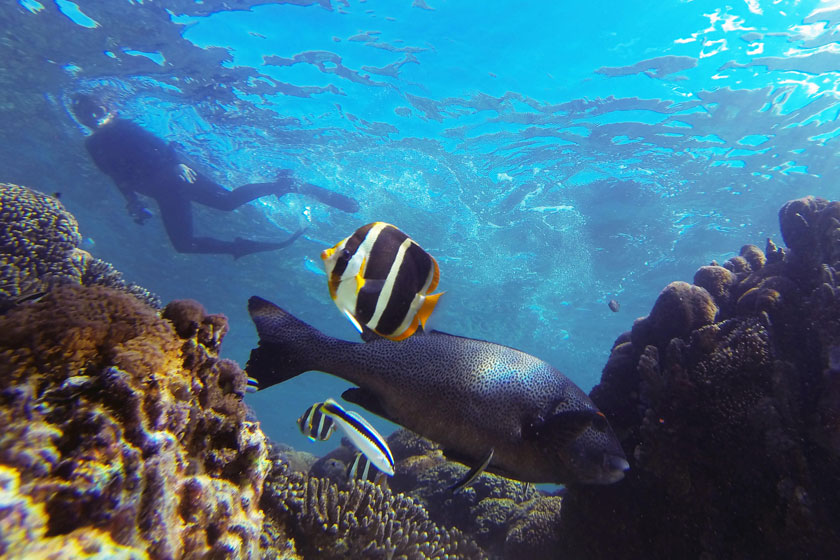 The underwater topography of the scuba diving and snorkelling sites around Lord Howe Island includes everything from trenches and volcanic walls to caves and soft coral gardens.

Such is its beauty that the archipelago is one of only four island groups on the planet which is recognised by UNESCO as a World Heritage site.

The Lord Howe Island Marine Park literally surrounds the island, protecting its wealth of sea life. There are no rivers draining into the ocean, no commercial fishing in the vicinity and very few tourists.

These factors help to keep the waters as clean and clear as possible, with visibility averaging 30 metres.

There are more than 60 stellar scuba diving and snorkelling spots at Lord Howe Island, most of which are just 10 to 20 minutes by boat from the shore.

Among these treasures is the world’s tallest sea stack at Balls Pyramid, where schools of rare and colourful fish teem around the coral walls beneath the surface.

In fact, at most dive sites around the archipelago, visitors can expect to see incredibly rare creatures like Spanish dancers, Galapagos whalers and ballina anglefish.

Two dive shops on the island provide professional and experienced dive training and guiding all year round.